How we chose our topic

The topic of classism has always fascinated our group; coming from different backgrounds, different schools, and different socio-economic levels, we were curious as to whether the perception of other, foreign nations on the issue of social inequality and wealth mattered as little as it did in Singapore.

How we conducted our research

To do that, we decided on the use of movies and documentaries, and agreed to make our own documentary at the end. For research, we would watch three movies in particular: Us (2019), Joker (2019), and Parasite (2019). These three movies were decided on due to their wide variety: Us is set in the modern-day USA, and follows a small American family; Joker takes place in 1981 and follows one man in particular as he struggles to deal with society around him; and Parasite discovers the true divide between rich and poor, and what happens when they are forced together.

With this in mind, we watched the three movies on three separate occasions, to ensure that our minds would be fresh, and took notes during the screening.

Process of how we created and developed our documentary

Firstly, we had to understand the significance of classism, decide on the basis of comparison and discuss how to showcase our understanding of classism in films in the most effective manner. Eventually we decided on a documentary to illustrate how symbolism is used in all three films to show classism and the differences in types of classism portrayed in the three different movies and their impact on presenting classism as a whole. 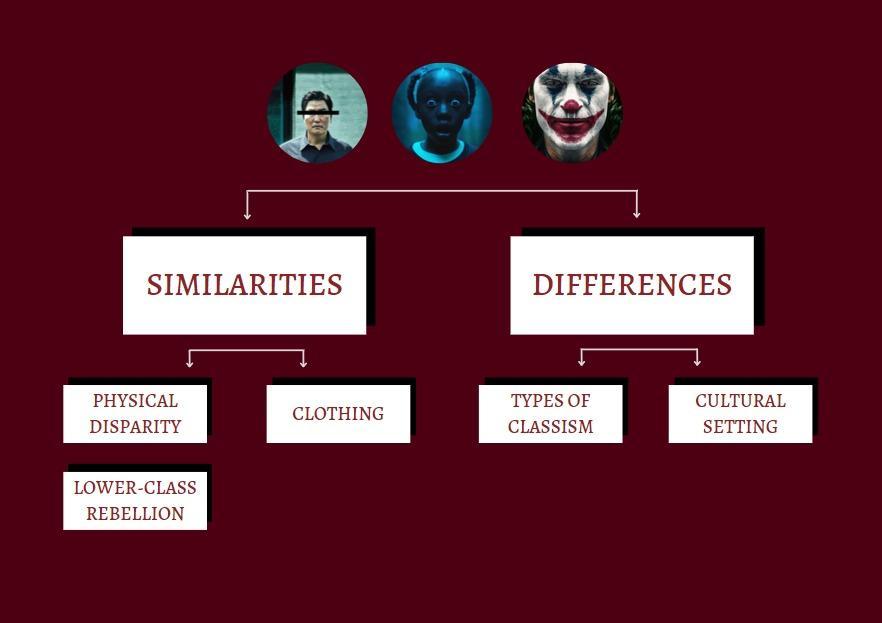 We chose to do the documentary because we felt that there was no better way to share our thoughts but to showcase it through the same medium these filmmakers have utilised. By doing so, it allowed us to better understand what these filmmakers were thinking and was also a more interesting manner of showcasing our idea which helps in capturing our audience’s attention.

Secondly, we had to plan out how the documentary is going to be executed before we can start production as well as coming up with the comparative analysis which is crucial as it is the backbone of our documentary. We attempted to do a storyboard and kept researching by studying relevant media. We had many trials and errors but luckily under the guidance of our Capstone project supervisor – Mr Jared Goh, we were able to come up with a storyboard and our comparative analysis. Next, we had to fit our ideas in our comparative analysis into our storyboard and organise it in a minute by minute breakdown format so as to showcase our thoughts in a more efficient manner and improve production quality. After we were all satisfied with the content in our minute by minute breakdown and having a clear direction of what to produce, we proceeded with production. Production of the documentary was tough because of technical issues, copyright issues and more etc. Fortunately, we never gave up as we were passionate about our topic and finished it after putting in our best effort.

Overall, it was an enjoyable and manageable process of creating and  developing our documentary as we had divided our work evenly by playing to each team member’s strengths, proper time management and our passion sustained us throughout the journey as we believe in shedding light on classism and promote these films as a bonus.

How it relates to annual theme: Identity and Diversity

To understand how it relates to identity and diversity, it is important to know and understand the definition of classism which is the prejudice and discrimination towards a certain class usually due to social attitudes and government polices that are set up to disadvantage lower classes. Classism is one of the most problematic ideologies prevalent in today’s society as the lower and middle class are the majority of the world’s population while the higher, wealthier class are the minority, and they benefit from the disadvantage of the majority. One’s social class reflects not only the material conditions of people’s lives, but also helps to shape cultural practices and behaviours. This then creates cultural identities among the respective social classes, and these identities are then rooted in subjective perception of the social class ranking. Therefore, it is evident that classism has shaped the identities of many in the world across time. Hence, symbolism is effective as it showcases and reinforces this overarching idea and theme of classism in shaping our identities in one way or another. Diversity comes in when classism is viewed through different lenses, hence different perspectives are shown in the three different films illustrating the different types of classism happening in different parts of the world, and their impact on presenting classism as a whole.

Overall, it is through exploring and understanding the different perspectives portrayed by different films that we are able to cross refer and better crystallise our understanding of this complex problem of classism and how it shapes our identities and way of life. Hence, our project also illustrates the importance of identity and diversity in helping us understand ourselves and the world we live in.