Photo by USGS on Unsplash

As changes in land use such as urbanisation, reforestation and deforestation occurs, the receival of precipitation by the catchment area is affected to varied extents. Due to the change in land use, the characteristics of the land and drainage basin changes and has a large influence over the speed and time in which water arrives and leaves the gauging station. The influence on speed is reflected in the lag time of the hydrograph and the amount of water within the catchment area is indicated by the peak discharge, thereby determining the shape of the hydrograph and the river discharge.

Influence of urbanisation on flood hydrographs 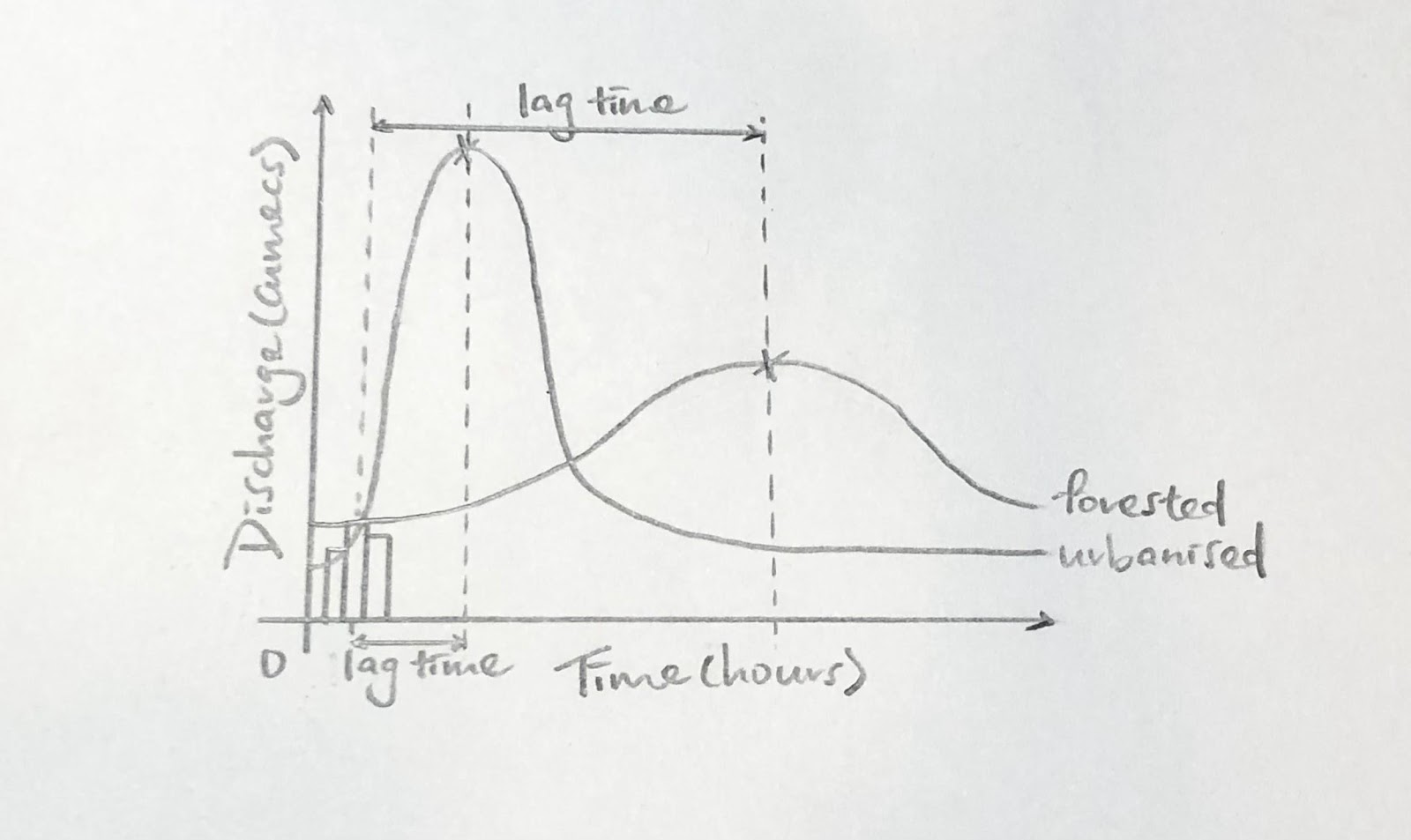 As seen from the hydrographs above, the urbanised area has a shorter lag time, steeper rising limb, as well as higher peak discharge than that of the forested area. In urbanised areas, impervious surfaces such as tarmac and concrete are more commonly used, thus water cannot infiltrate through these surfaces. Therefore, during a rainfall event, the reduced infiltration rate results in the great increase in overland flow and increased runoff generation. Due to the increased surface runoff, precipitation reaches the gauging station at a faster speed, thus the steep rising limb and shorter lag time as lesser time is taken for precipitation to reach the gauging station. Additionally, in some urbanised areas, gutters and drains are constructed, helping to carry water more quickly due to less friction with the banks to the nearest river. This could also be a reason as to why urbanised areas experience shorter lag time and higher peak discharge.

Influence of deforestation on flood hydrographs 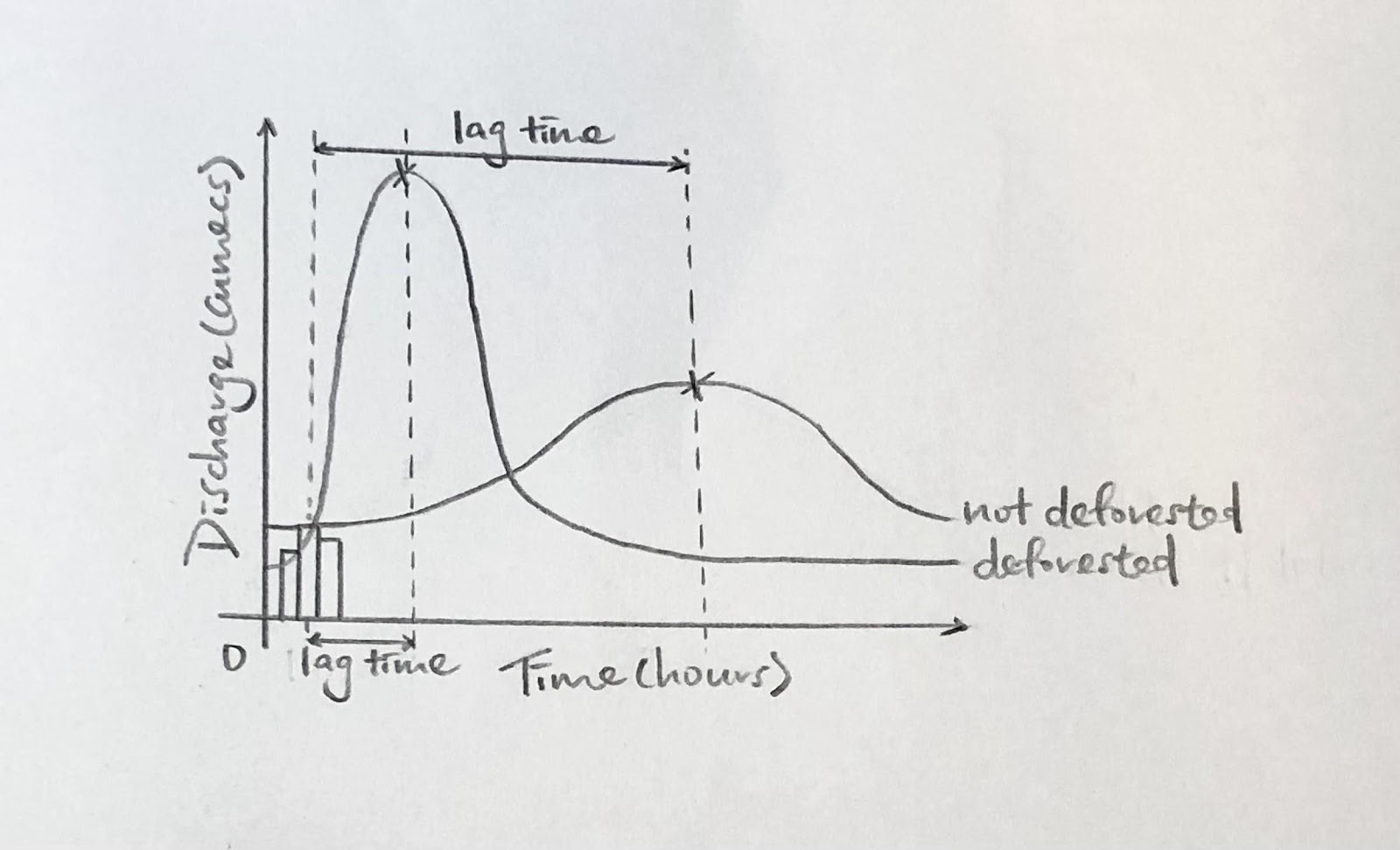 As seen from the hydrographs above, the deforested area has a shorter lag time, steeper rising limb, as well as high peak discharge than that of the area that did not undergo deforestation. In deforested areas, the lack of vegetation results in direct precipitation to hit the soil, which will lead to compaction due to the raindrop effect, reducing infiltration and hence more surface flows (infiltration excess flows), which are faster than the sub-surface flows which are dominant in forested areas. This explains the shorter lag time and steeper rising limb contributed by the high speed at which the precipitation reaches the gauging station during a rainfall event.

The peak discharge is higher in deforested areas than that of in areas that do not experience deforestation due to the lack of interception from trees, increased precipitation compacts the soil, decreasing the porosity of the soil. This reduces the rate of infiltration of water into the soil, resulting in more surface runoff (infiltration excess flows), thus more precipitation recorded by the gauging station. Tropical rainforests intercept up to 80% of rainfall whereas arable land may only intercept 10%. As seen the presence of trees is essential to the discharge of an area as they reduce direct infiltration and intercept precipitation, reducing infiltration rates, leading to a decrease in peak discharge in areas that are not deforested. Therefore, the lack of vegetation would result in higher peak discharge due to exposed soil contributed by the absence of trees, increasing peak discharge.

Influence of reforestation on flood hydrographs 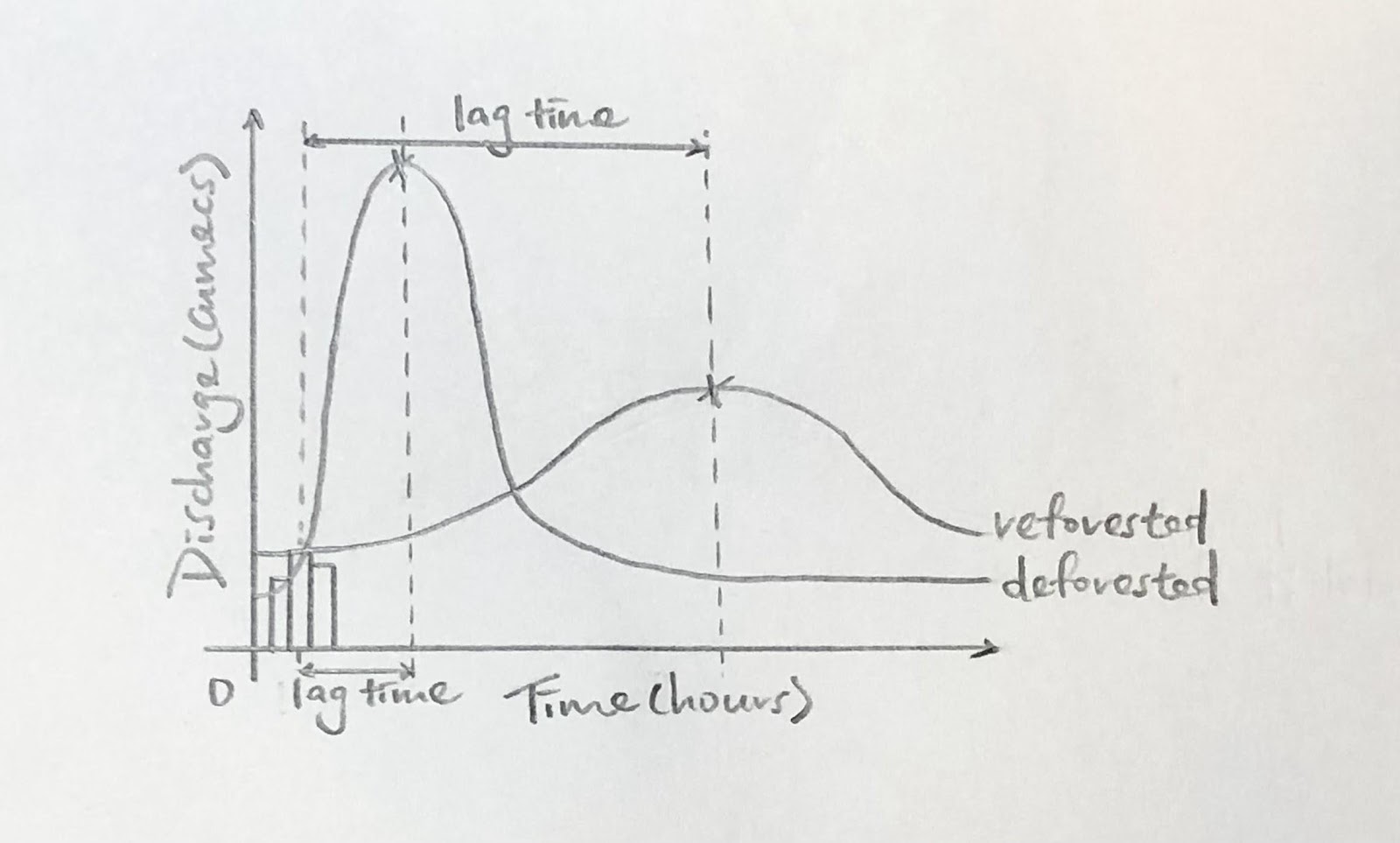 Reforestation is the restoration of a forest via replanting the area with trees and vegetation, re-establishing a forest on the land which once had a forest. As seen from the hydrographs above, the reforested area has a longer lag time, gentler rising limb, as well as lower peak discharge than that of the deforested area. This is because where vegetation such as trees and plants is dense, interception by the canopy would be more substantial, leading to higher interception and biological water storage and some of it will be lost to evapotranspiration. Due to the greater amounts of infiltration and more sub-surface flows in reforested areas, the rate in which precipitation reaches the gauging station is slowed, thus the longer lag time and gentler rising limb than that of the deforested area.

In conclusion, urbanisation and deforestation have similar effects on flood hydrographs as they both result in higher peak discharge, steeper rising limb and shorter lag time. On the other hand, reforestation causes the opposite, where it causes lower peak discharge, gentler rising limb and longer lag time. These observations as seen in the hydrographs illustrated above can be extended to whether an area is more prone to flooding. For example, urbanised areas and deforested areas are more prone to flooding due to the absence of vegetation and the area characteristics such as permeability of the ground, while reforested areas are not as prone to flood risks. Therefore, changes in land use can affect the discharge levels of drainage basins, leading to changes in flood hydrographs as well.