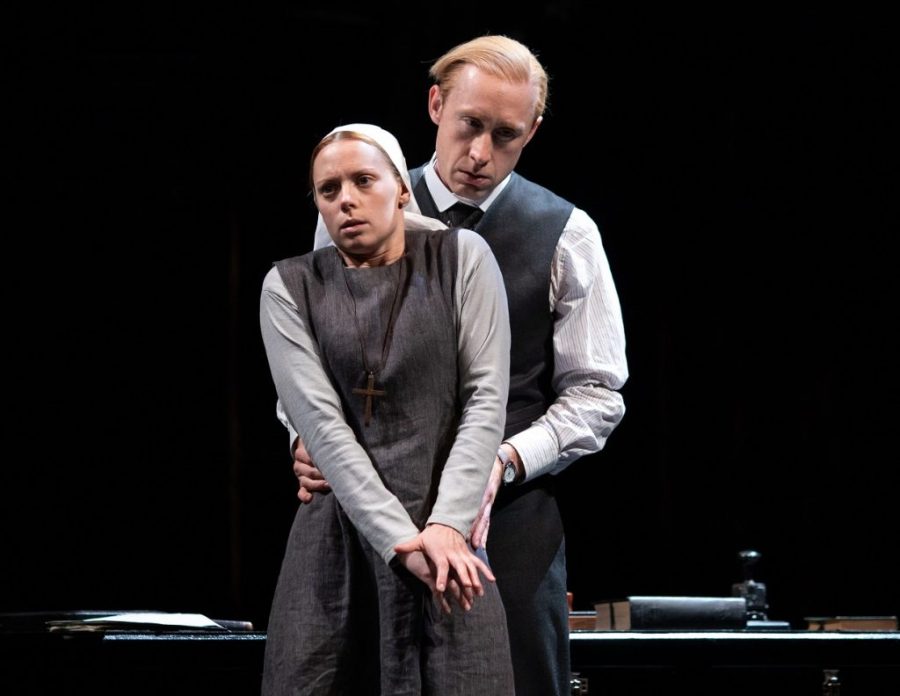 Write a critical commentary on the following passage (Act 2 Scene 4), relating it to the presentation of Angelo here and elsewhere in the play.

This passage begins with Angelo’s soliloquy as he reveals the internal conflict between restraint which he had always strictly believed himself to live by, and the liberation of his growing sexual desires for Isabella. It then transitions immediately to a dialogue between Angelo and Isabella, revealing to the audience Angelo’s growing self-awareness as he gives in to his sexual temptations and allows them to manifest in his speech. Hence, Angelo is presented through this passage as a man susceptible to human passions and temptations of the flesh, just like any other fallible human being, contrary to earlier depictions of him in the play.

Firstly, the passage presents Angelo undergoing an internal battle between restraint and the liberation of his sexual desires. This is evident from his religious allusions to heaven as he acknowledges how ‘Heaven in my mouth, as if I did but only chew his name, And in my heart the strong and swelling evil of my conception’. Angelo’s agony and struggle to come to terms with his irresistible sexual urges are emphasised by the use of the intimate language of ‘my mouth’ and evil of ‘my conception’. It suggests how he deeply reproaches himself for going through the motions of eating the bread of the body of Christ and thus pledging himself by Heaven to be virtuous, but yet he has committed a vice by even conceiving lustful desires for Isabella. This highlights Angelo’s initial disbelief over his own tendency to be sexually aroused, when as evident from Act 1 Scene 4, others had perceived him as ‘a man whose blood is very snow-broth; one who never feels the wanton stings and motions of the sense.’ Furthermore, the alliteration and accompanying imagery of ‘strong and swelling’ suggests how Angelo’s lustful desires are uncontrollably growing, and he feels desperately powerless to restrain them. This is also evident from how Angelo acknowledges ‘blood, thou art blood’. Here, blood refers to human passion that cannot be denied and the repetition of the word ‘blood’ suggests how Angelo is slowly relenting to the fact that he cannot completely repress his sexual temptations.

Secondly, the passage progresses and has established the fact that Angelo’s restraint is overpowered by his desires, the passage reveals Angelo’s increasing tendency to be hypocritical as he abuses his position of power and authority. He laments, ‘O place, o form, how often dost thou… wrench awe from fools, and tie the wiser souls to thy false seeming!’ This draws the audience’s attention to how one’s respected status and outward appearance can serve as a pretence to conceal true intentions. This is compounded by Angelo’s declaration ‘let’s write good angel on the devil’s horn – Tis not the devil’s crest.’ The word choice of ‘angel’ is especially apt here as it is directly associated with Angelo. Similar to the analogy, Angelo is the devil’s horn as he later blackmails Isabella to ‘lay down the treasures of [her] body’ as the only way to save her brother, Claudio’s life’. He hides behind the projected image of a ‘good angel’ as the public remain convinced of his ‘unsoiled name, th’ austereness of [his] life.’ Hence, Angelo is presented as growing in audacity as the passage reveals his intention to misuse the perception of his virtues to allow him to go unpunished for harbouring and acting on his evil desires.

Finally, the passage continues to unravel Angelo’s attitude towards law and justice, in particular how his perceptions are affected by the growing presence of his sexual urges. This is evident from his misinterpretation of the word ‘know’ in Isabella’s speech. Although Isabella means to enquire about ‘[his] pleasure’ as in his verdict on Claudio’s execution, he replies ‘That you might know it, would much better please me, than to demand what ’tis’ insinuating that he would prefer Isabella to experience his sexual pleasure. Additionally, Angelo poses Isabella a loaded moral dilemma by asking ‘might there not be a charity in sin, to save this brother’s life?’ Angelo’s build-up towards this question in the passage further reveals his crafty intentions to realise his sexual desires by first leading her towards sin as she remarks ‘Tis set down so in heaven, but not in earth’. More importantly, Angelo’s assertion that Isabella’s sin of ‘[fitting her] consent to his [sharp] appetite’ could become an act of virtuous mercy if it allows Claudio to live, reveals his problematic attitude towards the law. Angelo suggests that it is acceptable to bend the law in Isabella’s case, as her unlawful act would satiate his own sexual desires. However, he also emphasises through declarative sentences that ‘your brother cannot live’ and ‘yet he must die’, insisting that Claudio should face the harsh punishment of death for his sin of fornication. Therefore, the passage presents how Angelo is inconsistent in his enforcement of the law, willing to manipulate it accordingly to suit his sexual temptations.

In conclusion, Angelo is presented in the passage as a character first struggling to come to terms with his lustful desires, then shifting towards an acceptance of their ability to overpower his restraint. This is manifested in his active attempts to satisfy these desires as revealed through his dialogue with Isabella. At the same time, Angelo’s attitude towards the law is put up to scrutiny, suggesting the susceptibility of authority being abused to suit the enforcer’s needs and intentions.