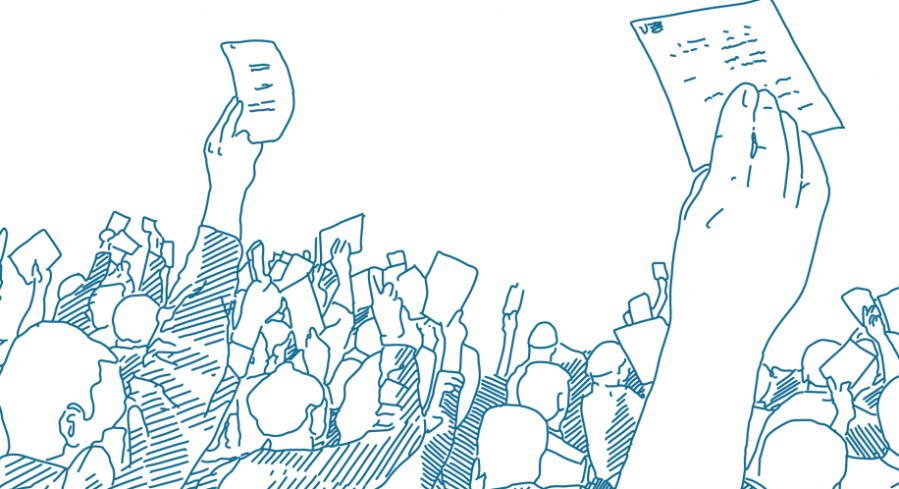 It can be argued that democracy has not taken root in Southeast Asia as some countries were more familiar with other forms of government post-independence due to influences from their culture and colonial rule and hence did not choose to uphold and sustain democracy.  This is evident in Indonesia, with the Javanese constituting the largest ethnic group, making up around 40% of the country’s population. The Javanesesyncretismhad been credited with instilling in Indonesian a feudalistic world view that fosters unquestioning obedience to powerand their leaders because their leaders’ powers were deemed to have been desired from cosmos. Islam’s influence in Indonesia has also facilitated the rise of the military and maximum governance as prophet Mohammed had shown to be not just a religious leader but also a military leader, giving due credibility to the military. Furthermore, there was the lack of the necessary pillars for the support of a democratic regime as Indonesia had inherited from the Dutch and Japanese the tradition and structure of an authoritarian state.  Hence, the years of authoritarian Dutch colonial rule under the Dutch East Indies were also arguably ingrained in Indonesian society an acceptance of authoritarian, further providing obstacle towards the proper functioning of democracy. Similarly, the Vietnamese faced oppression by the French, effectively suffocating moderate nationalist movements and leaning the Indochinese communist party as the only viable movement fighting for national liberation.Ngo Din Diem created a maximum government as it complemented communist rules.  This led to the rise of military leaders such as Nguyen Van Thieu. The military leaders sought to strengthen the authority of the state so as to focus government effort on combating communism.  Hence, there was no space for democracy to come in, leaving the Vietnamese unexposed to democracy.  In addition, the average age of the members of the Politburo in 1992 was a little over seventy. They had spent their youth in the mountainous jungles of North Vietnam during WWII and the first Indochina war,  and some of them in the Vietnam.   They all belonged to the generation of veteran revolutionaries but have little knowledge of modern economy, technology or methods of management. Hence, they were still rigid and strictly abiding by the political culture of Vietnam, which emphasizes Confucian’s belief of hierarchy and order.  Therefore, due to oppression Indonesia and Vietnam faced from their cultural masters, they had a lack of exposure to democracy as they were only familiar with authoritarian rule and were not aware of other forms of governance. This is worsened by the culture of these states, further exacerbating the unwillingness and disability of the states to uphold democracy.  Hence, with inherited structures of a police state from the Dutch and the Japanese and little colonial administrative experience, strong Javanese tradition that emphasized patrimonial style of rule and advocated concentration of power in Indonesia, preventing the establishment of democracy.  Monarchical traditions and repressive French rule in Vietnam meant little exposure to parliamentary democracy.  Thus, with influences from their culture and colonial rule leading some Southeast Asian countries to choose another form of governance, it could be said that democracy was not established and hence has not taken root in Southeast Asia.

In addition, democracy was not able to take root in Southeast Asia as the democratic government failed to bring about economic and political stability, resulting in other forms of governance appealing more to the masses.  This is evident in Burma, where factionalism within the ruling Anti-Fascist People’s Freedom League (AFPEL) led to an inability to resolve economic problems.  The budget crisis in 1958 led U Nu to incite the military to form a caretaker government, itself a tacit acceptance of the failure of democracy.  The caretaker government initially appeared to be interested in building state capacity.  It reduced corruption, improved bureaucratic efficiency, and managed to deal with the pocket armies.  This hence emboldened the military and severely undermined the credibility of civilian rule and democracy.  In addition, in Indonesia, the economy was stagnant through the 1950s with regional instability severely affecting Indonesia’s economy.  The political upheaval in the years of revolution meant that the independent government inherited badly damaged plantations and infrastructure, and there was also a population explosion in the first decade of Indonesia’s independence that added further strain to its resources.  From 77.2 mil in 1950, the population rose to 85.4 mil in 1955 and later to 97.02 mil in 1961.  As food prices failed to keep up with the population growth, food shortages ensued, followed by high inflation, as the general cost of living increased by some 100% from 1950-1957.  Hence, with a stagnating economy and high inflation (stagflation), impoverished Indonesians saw that a liberal democratic system yielded few tangible benefits and were inclined to support alternative forms of government that promised better.  In this case, the increasing political centralisation under Sukarno seemed to offer more stability amidst the economic chaos.  The government also proved incapable of dealing with the regional rebellions that erupted in Sumatra and other parts of the outer islands from 1956-1958, allowing some regional commanders to declare an alternative revolutionary government, the PRRI.  Hence, we are able to see how democracy failed to confer upon some Southeast Asian societies the necessary peace and stability.  They were often unable to provide the quick and decisive leadership required amidst the political unrest caused by successive rebellions and ethnic tension, and whether they could provide the political continuity and stability required for economic growth.  As such, their lack of action further exacerbated economic problems and insurgencies, or were themselves the cause of it.  Maximum governments thus became an appealing alternative in the light of these failure of democracy to deliver sound and effective leadership.  Hence, the incompetency of the democratic governments led to a decrease in faith in democracy of the people.  With them being repulsed by democracies, it can be said that democracy has not taken root in Southeast Asia as it was not sustained after independence due to the people favouring other forms of governance, owing to the failure of democratic governments.

However, democracy has indeed taken root in Southeast Asia as certain Southeast Asian states have integrated democracy into their system of governance and has been consistently sustained from independence.  This is evident in Malaysia, where elections have been held continuously after independence, from 1955 onwards.  The subsequent constitution of 1947 also sealed the regime’s structure. The power of the masses was evident in the 1969 elections, where even though The Alliance held majority in the parliament, its share of the popular vote fell to 48.5%, it’s lowest ever.  They also failed to obtain a majority in Selangor and Perak, two states with large Chinese communities.  The decrease in The Alliance’s popularity was largely due to the inter-racial riots on 13 May that led to racial problems simmering beneath the surface and there was dissatisfaction with The Alliance’s policies and perceived injustices and discrimination.  Similarly, Singapore has also been consistently having elections since 1948, with some influence of their British colonial rulers.  Their first election after securing full internal self-government was marked by 1959, which suggests even without British intervention and influence, Singapore still chose to conduct elections, implying that the system of democracy has been accepted by Singapore.  The continued elections further reinforces the establishment of democracy in Singapore.  In the 1990s, Singapore declared that it’s practice of parliamentary democracy observe the formal procedures of an electoral democracy.  Furthermore, in 1985, there was a shift towards consultative politics that started after Dec 1984 elections, with the establishment of the feedback unit in March 1985.  The aim of the feedback unit was to give Singaporeans a forum to understand major policies, ask questions, make suggestions and generally participate in working out a solution.  Hence, this shows how the people had the opportunity to voice out their discontent to effect change.  Therefore,  the sustained elections from independence in Malaysia and Singapore suggests how democracy has taken root in Southeast Asia.  Admittedly, the ruling system in Malaysia and Singapore is not purely democratic and is soft authoritarian.  This might be true as opposition parties in both countries face numerous obstacles to getting their foothold in parliament.  In Malaysia, the opposition was subjected to shorter campaign periods and bars on open air rallies.  In Singapore, the People’s Action Party encourages one-party dominance in their constituency.  Therefore, this shows how Singapore and Malaysia are not fully democratic and have instead integrated characteristics of democracy into their way of governance and this hybrid system has sustained through time, reinforcing that democracy has indeed taken root in Southeast Asia.

Democracy was also able to take root in Southeast Asia because in certain countries, the societies opposed the form of governance preferred by the government due to the growing presence of a local, more educated middle class.  This was evident in Indonesia, where its landscape became ripe for democracy.  In 1998 which university student protests grew, which quickly grew into mass movement that was triggered by economic problems, involving food shortages and mass unemployment, and eventually led to the resignation of Suharto and the fall of the New Order government.  This readiness was due to three decades of high economic growth rates and state resources pumped into raising educational levels, which saw the rapid expansion of an Indonesian middle class that was fairly large and well educated by 1998.  Hence, equipped with higher levels of education, the students were able to make their voices of discontent heard by the government. Similarly, in the Philippines, Marcos lifted martial law in 1981 and attempted to bolster his legitimacy through democratic mechanism, allowing the oppositions to run under the umbrella LABAN in 1986 and Aquino, running as the only opposition candidate, was widely expected to win handsomely.  Like the 1981 and 1969 elections, there was fraud and intimidation, but the real anger stemmed from the rigging of the actual vote count. Despite criticism, Marcos tried to force the National Assembly to declare him the victor. This election marked his demise, as the People Power revolution spread like wildfire, with thousands taking to the streets of Manila demanding Marcos’ departure. Hence, it is evident in Indonesia and Philippines how through education and increased vocalisation led to the fall of authoritarian governments an triggered the move back to democracy. In Indonesia, it made a transition from an authoritarian regime to a fairly healthy democratic one, lasting until today evident in the three free and fair elections held in 1999, 2004 and 2009, which set Indonesia in a stable, democratic path. In Philippines, democracy was continued under president Aquino and president Ramus (1992-1998) . Hence, it is evident that democracy has been established and sustained in some Southeast Asian countries, therefore validating the assertion that democracy has taken root in Southeast Asia.